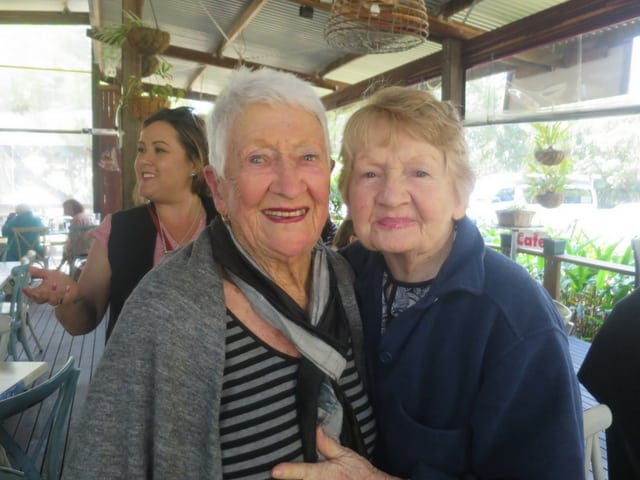 A recent trip to Stradbroke Island ended in a twist of fate for one Arcare Slacks Creek resident.

For some residents the trip to Stradbroke Island was a first but for others they had made the trip on many occasions.

Once the group was off the barge Shirley mentioned that her cousin lived on the island.

Shirley said that it had been years since they had seen each other; and she wasn’t even sure if she was still there, but wouldn’t it be nice to know for sure.

After Shirley shared this information it became an island wide search for Shirley’s cousin Connie.

The group decided to have lunch at Seashells on Stradbroke and while there they decided to ask Jeff (who greeted them so enthusiastically) if he knew Connie.

Remarkably, Jeff did know Connie and rushed straight to the phone to call her.

Unfortunately, that was a dead end as Connie did not answer.

However, Jeff had one other idea: Connie often spent time at the Mineriba Respite Centre.

Jeff got to work calling the centre as well as a number of other people he thought she could be spending time with.

Fifteen minutes passed and someone from the Mineriba Respite Centre called back to say that Connie is on her way down to Seashells.

Everyone was on the edge of their seats waiting for Connie to arrive.

At long last a white car pulled up outside the restaurant.

As Connie approached the group everyone was touched by the special moment that was unfolding.

Many tears of joy were shed as the cousins embraced for the first time in years.

Shirley is only slightly younger than Connie who turned 88 in July.

Shirley and Connie’s fathers were brothers and the two ladies spent time getting up to mischief together as children.

The two laughed together about how they used to pinch paw paws from their neighbours’ gardens (even though they had some in their own yard).

Connie has lived on Stradbroke Island for the last 42 years and she recalled a visit from Shirley and her family for her 80th birthday celebrations.

Although their catch up was short and sweet the group was invited to visit another time.