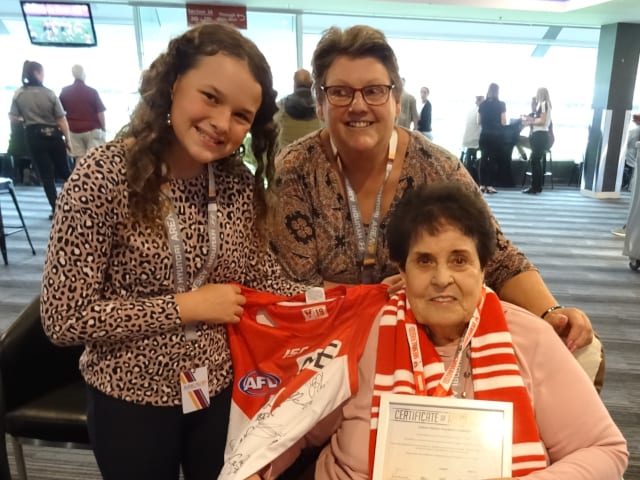 This is a heart-warming story of a lady at Arcare Hope Island with a wish to meet her sporting heroes.

To the Swans Marketing Team:

I would like to introduce mysell, my name is Allison Ferguson and I am a Lifestyle Coordinator at Arcare Hope Island. We are a 120 suite Aged Care Facility in Gold Coast, Queensland. In January 2019, I began the “My One Wish Project” to fulfil the wishes of our clients. Some have included having a roast pork dinner, hearing their favourite band play or going up in a hot air balloon ride.

I would like to request 4 tickets, special seating arrangements for wheelchair and hopefully, a meet and greet with the players for the Swans game against the Brisbane Lions on the 4/ 5/19 for one of my clients. Her name is Patricia Rice and she is an avid Sydney Swans Supporter, evident in the letter written by her son-in-law Russell (see letter below).

The idea started when Russell asked me to print a copy of the Swan’s schedule for Pat as he will be away for 7 weeks. He also asked if I could remind her on the day of the game so she wouldn’t miss it. When I gave Pat the schedule, she had a tear in her eye as she has been a fan for over 71 years – her 89th birthday is on 29/4/19.

What a birthday present it would be! When I printed the schedule and saw that there was a game in May at the Gabba, I thought what a perfect opportunity for Pat to see a game of her beloved team.

Pat and Allen lived in South Melbourne, Carlton before moving to Cheltenham. They had 3 children Keith (24/5/79), Stephen (10/9/50) and Dianne (17/11/53). I met Dianne in 1969 and later married her in 1971. When the day arrived to meet Di’s parents for the first time, I was met at the front door and asked what team I barracked for – my reply was Collingwood and the front door was closed in my face.

Both were devastated that South Melbourne relocated to Sydney to be now known as the Sydney Swans. Over time they grew with the move and became avid that they never miss a Sydney Swans game on TV. On visiting their home in Cheltenham, later Launceston and then the Gold Coast, red & white memorabilia would be found everywhere – in their lounge, kitchen, car and even the loo. One could not get them out of the house or talk to them whilst there was a Sydney Swans game on TV. In fact, they would watch the replay the next day hoping for a bigger win or hoping that a loss could be turned around.

Pat has had a fused left leg for many years, which has limited her mobility, however it has not limited her Swans passion and avid viewing on TV. Allen passed away in Sep 2016. Since then, Pat has been in Hope Island Arcare and still follows the Swans with the same routine of watching the game live and the replay the next day. You must NOT organise any activities which clash with her beloved Swans games or you will feel the lash of her tongue.

Patricia Rice’s one wish has now been granted.

Arcare pride themselves on building relationships with clients and their families. Lifestyle Coordinator Allison Ferguson saw this as a perfect opportunity to make a wish come true for Patricia, after seeing her reaction from receiving the Swans schedule. Allison put her secret plan in action and contacted the Swans Marketing Team.

The Swans team secured VIP seating for the Brisbane Lions v Sydney Swans game on Saturday May 4th at 4:35pm. With confirmation in hand, Allison went to see Patricia on Wednesday and told her she had a few surprises for her. Once Patricia found out that she was going to the game at the Gabba, she stated she felt like a kid in a Candy Shop and that she won’t be able to sleep a wink until Saturday.

Game day arrived and Patricia was very excited. On arrival, we were shown to the VIP area and Patricia could hardly contain herself as she had a big smile on her face. Allison presented her a pink box containing other surprises. To her astonishment, there was a signed 2019 game guernsey, scarf, lanyard, key ring and sticker.
“The day was truly amazing we had the best seats in the house right up the front I could see everything,” Patricia said.

The Swans support crew came and introduced themselves to Patricia and throughout the game many people chatted with her and took a group photo. Patricia stated, “Sitting at the Swans game brought back so many memories. I wished my husband was with me throughout the game as he would have loved it,”
“This whole experience is something I will treasure for ever. It was better than I ever imagined”. 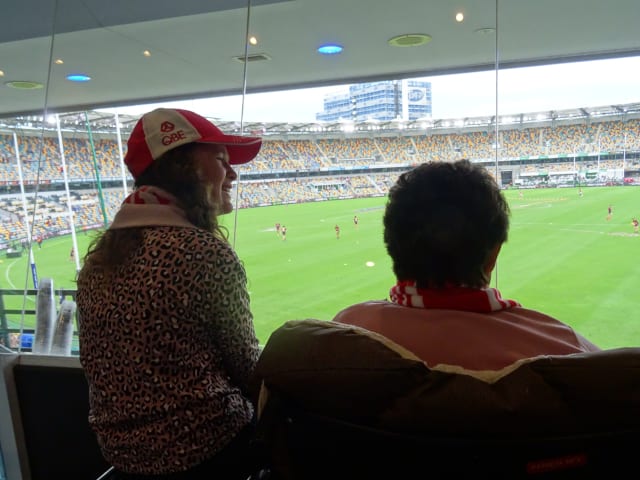 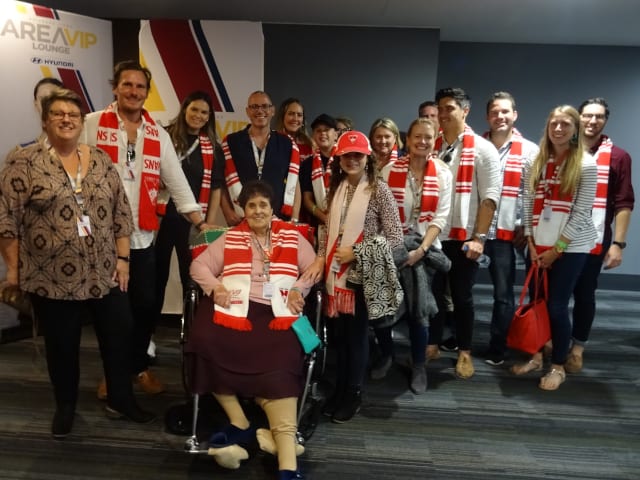 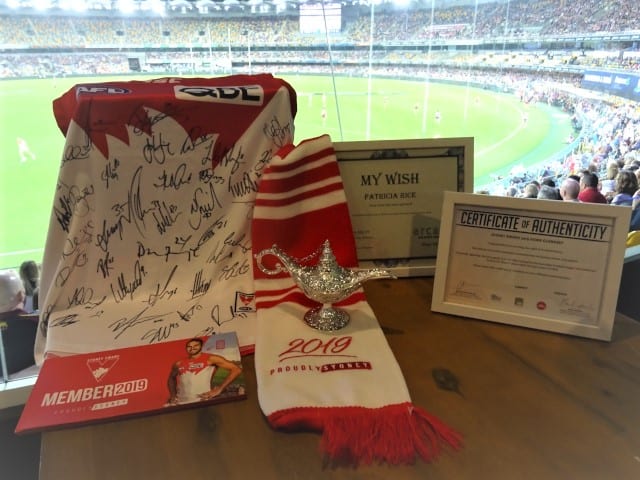