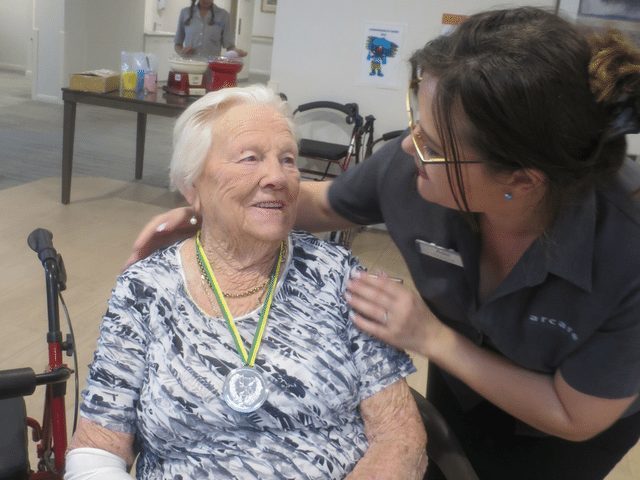 The Arcare Slacks Creek Games kicked off with a traditional opening ceremony complete with a passionate rendition of the national anthem.

Following the opening ceremony, the games began with a contest of minds.

The quiz tested everyone’s knowledge, however with many sports lovers in the building it was a close game.

Following on from the quiz was the ultimate test, the egg and spoon race.

After an intense race the winners were left standing.

A test of agility and precision was next on the list, who could throw the ball into the bucket?

Whoever could get the most balls out of six into the bucket would be the winner.

Needless to say, the Lifestyle Team got a workout chasing after the stray balls.

Last but not least the competitors feasted on some well-deserved fairy floss to top off a great morning.

We were also lucky to hear the story of one of our resident’s husband and his real life brush with the Olympic Games.

Bernice Haig was kind enough to share with us the story of her late husband, Duncan, who was very involved with the local Methodist Church when they lived at Blackrock, Melbourne.

He gained interest in choir singing and later joined the Sandringham Municipal Choir and because of his fine tenor voice, he was selected to be a part of the Melbourne City Choir.

In the 1956 Olympic Games, he was a part of the massed choir, singing at the opening and closing ceremonies.

He was very proud of his involvement in the games.

During the closing ceremony, he hopped over the fence and with an empty pie bag, scooped up a hand full of cinders from the running track and put them in an old Eta peanut paste jar.

This memento traveled with him for the rest of his life.

Luck of the Irish 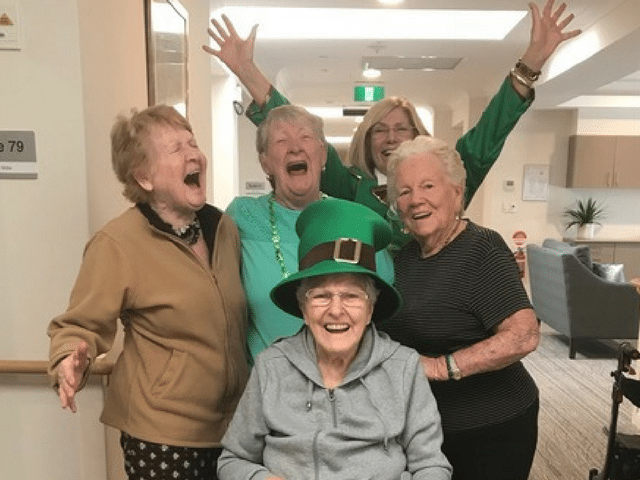 Residents at Arcare Slacks Creek were treated to an extra special event on St Patricks Day this year with family and friends joining in on the fun.

One of the special guests was Carol daughter of resident Nancy.

Carol and Nancy are an action packed duo that bring much joy and laughter to our community.

Carol was certainly dressed the part, together with Nancy in her Irish socks, they strolled the corridors entertaining all on their way past.

People were happy to join in on the singing (even if they didn’t quite know all the words).

The celebrations continued into the afternoon.

Many residents kicked on to Irish dancing in the afternoon facilitated by the Lifestyle team.

“You have made my day, I had so much fun, I event feel like wiggling even though I don’t dance,” said resident Yvonne Cambridge.

The singing continued throughout the pre-dinner drinks gathering.

The party was so popular that no one wanted it to end!

Eventually when it wrapped up, everyone walked away with a spring in their step.