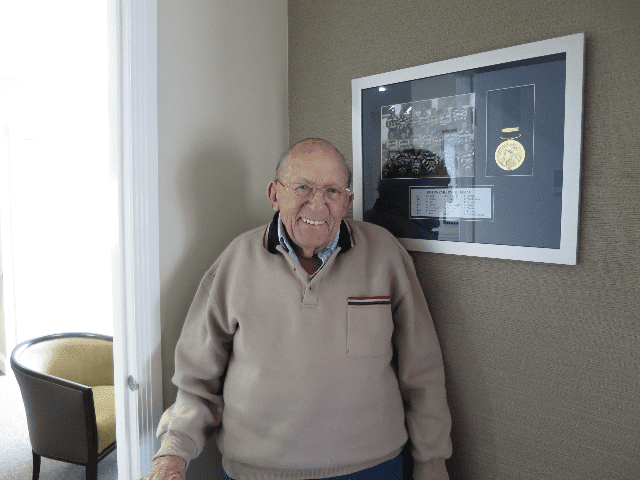 Legend of the game

A new resident in the Arcare Point Lonsdale Community is a real legend of the area. Russel ‘Hooker’ Renfrey is a former VFL player who played 202 games for Geelong Football Club. In a career spanning 1946-1956, Russel was a premiership player with back-to-back wins in 1951 and 1952. Over the 1951 and 1952 seasons, Russel was the only player to play in all 26 wins without loss – a record that still stands to date. In 1948, Russel also represented Victoria in interstate football.

Russel joined Geelong with his only prior football experience in matches played during his stint in the Army. He claims to have been the first ever ruck rover in league football, believing that the football commentators who consider Ron Barassi to be the first must have memory loss.

A leading goal kicker in his debut year with 38 goals, Russel says he owes a lot to his first coach Tommy Quinn and the legendary Reg Hickey, who was not only a great coach but also a great friend.

Remarkably while still playing football, Russel ran his own business. He spent three years as a councillor on the Newton City Council and then nine years as President of the Geelong Football Past Players Club.

He is a generous and warm man who, in later years, visited aged care residences to share his story. Something he still does today for the Arcare Point Lonsdale Community who love to hear his fascinating tales.