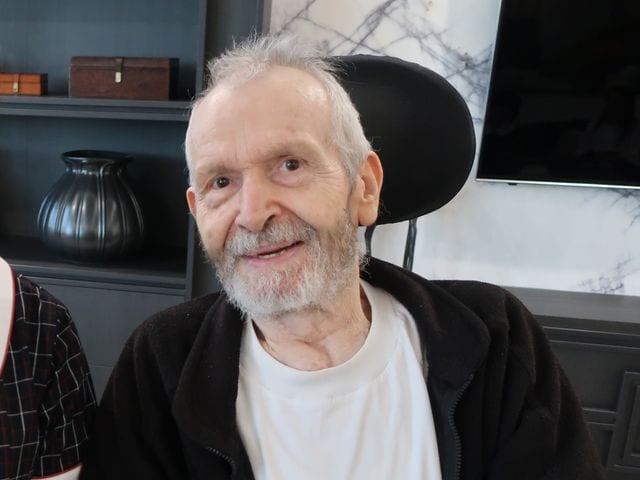 Although he now resides at Arcare Glenhaven, Rudi Welsch has lived a life across the world; with stories and memories that could entertain for hours.

In his spare time, Rudi has began putting his memories on paper with the most poetic style of writing.

His words paint many beautiful pictures, as though you were right there in his memory.

Rudi’s adventure through the Black Forrest in Germany is one he thought was too big to write about, so he captured the essence by explaining one morning of the trip.

Definitely worth the read!

‘What a piece of work is Man

The beauty of the world,

In form and moving how express and admirable.’ – Hamlet

Little white puffs of clouds moved unhurriedly across the early morning sky like so many woolly lambs looking for the greener pasture on the other side of the fence somewhere east from here.

The weather here almost always came from the West where it formed over the Gulf of Biscay and moved east across France, then further east to the other side of the Rhine to cross the Black Forest and continue east across southern Germany. One of the consequences of this pattern was that the tree trunks were clean on the side that was scoured by winds and lashed by rain while in the lee they were covered by lichen and mosses. This provided a handy indicator for hikers, obviating the carrying of a compass.

All of this was of no interest at all to the bodies buried in their sleeping bags with only the occasional nose or cheek turning blue with cold. The hut had been erected over a hundred years ago as a shelter for forest workers and the occasional shepherd and was located 1800 m above sea level, barely 100m below the tree line and therefore subject to quite cold temperatures even in the middle of summer.

A local group of our large bush walking club were able to purchase the hut and in years of voluntary weekend work had converted it into a comfortable overnight destination. A small kitchen equipped with pots and pans and bowls and plates and cutlery made it ideal for the solo hiker and small groups like ours. A commons room with tables and chairs was large enough for 15 to 20 people.

The sleeping arrangements were up a flight of stairs to a small landing which led to a door located at the highest point of the triangle formed by the roof-line. This opened into the attic that had straw filled mattresses left and right on the floor. Either the money had run out or it had been decided that no lining under the roof was required, the result being, we slept right under the terracotta roof tiles. With the resulting icy temperature.

Over the last few years a strange little custom had taken hold, particularly amongst youth groups: nobody wanted to be the first one to get up. The reason for this is not clear, but could be that the minute anybody made a move the request came from every direction: oh while you’re there, could you fetch my shoes/pullover/beanie/etc. The result was total silence, although just about everybody knew all were awake. That continued until that lump of straw in the ribs became too uncomfortable or the call of nature could no longer be ignored.

And so it was this morning, the first one up and all of a sudden there was movement everywhere with accompanying cries for shoes, towels, another blanket-all of which went unanswered-the general mayhem almost like a well rehearsed ritual. It only took a few minutes and six pairs of feet rushed down the stairs all ready to brace the early morning chill.

At first we set off chattering with cold, but as we walked further down the hill and the trees stood closer together and the canopy above grew denser we became aware of the natural stillness in a coniferous forest. A lone bird call could be heard from far away but there were no sounds from insects. Our footsteps were almost completely muffled by the thick layer of needles covering the floor.

Completely quiet now we could soon hear the splashing of water and soon also water running over and between boulders down the gully. Presently we arrived at the much anticipated fountain of youth which turned out to be a length of pipe rammed into the ground, thus gathering all the water into a full stream of water about 50 to 60 cm above ground level enabling you to place containers underneath for filling. It looked decidedly cold and uninviting.

We looked at the spring and at each other and back at the water and had to realise that nothing had changed. The water was still cold. Obviously we men had to be brave and lead the way at the same moment the girls had reached the same decision.

Now Sophie had a rather slim, almost skinny figure. She also had a tracksuit top with a zip to the bottom hem and she had swiftly disposed of it. Helga’s tracksuit top only had a short zip and had to be taken off like a pullover. Helga, unlike Sophie was cuddly, as a matter of fact very cuddly and it was easy to describe her figure as “rubenesque”. To take her top off, she used the age old ubiquitous move, practised by women around the world by crossing her arms across her body, grabbing the hem of the garment and with a smooth and swift move propel the clothes up and over her head.

The result was- by any standards- spectacular. Not only had she taken off as intended the tracksuit top and the shirt underneath but every other stitch she wore, including her bra! This sudden display of absolute perfection of form and shape, the delicate line of the curves had us boys thunderstruck. As one could say: our cup had runeth over with delight, especially as this jewel was there right in front of us in duplicate.

This display of the jewels in the forest didn’t last, Helga’s cups weren’t running over, and as icy hands of frost closed around her body, she realised that something had gone awry. With the same smooth and swift move that took the clothes up, she now brought them back down to settle in their accustomed place, thus ending the miracle.

The clothes had barely settled in place when she looked around to see if anyone had witnessed the miracle. Sophie, who stood next to her, gave her a little smile and a faint shake of the head, indicating that nobody had witnessed anything. But Helga was too suspicious, she wanted to know what the boys were doing all that time. What she saw astonished her and of course confirmed her suspicion. The Four of us were earnestly searching for blueberries. It was doubtful that even in the middle of summer the sun would rise high enough to penetrate the forest canopy to reach the floor beneath the trees. There was no undergrowth at all and certainly no blueberries.

We quickly declared the importance of the early morning wash and a more orderly approach to undressing was adopted. What followed next would have delighted any missionary roaming the lands in search for converts.

Pitiful pleas from formerly well known atheists and other infidels rend the air: Holy Jesus was uttered by one of them, Christ Almighty was another one, and several other deities from diverse religions were asked to intervene. The water, however, stayed as icy as ever. It was quite obvious that one miracle per day was all we could ask for. Washing was over in record time and it was obvious that the deodorants had to take over from soap and water.

We filled the buckets with water and made our way up the hill, again being captivated by the serene calm and enjoying the stillness of the forest. Of course the events from earlier on were still occupying our minds and we were only our normal selves, joking and laughing, when we came into sight of the hut and the promise of a hearty breakfast.

The well practiced morning routine took over, tidying up after breakfast, the same with the kitchen, tables and chairs back in place in the common room and than upstairs to the sleeping quarters where clothes had to be folded, sleeping bags packed into backpacks and the morning puzzle to be solved: how did we get all that stuff into the pack on previous days?

After a final look around to ensure all windows and doors were properly shut, the packs were swung onto the backs, front door locked and key carefully hidden so everybody could find it and we were ready to set off on yet another beautiful day. A quick look up at the sky confirmed the eastward migration of the woolly lambs had continued uninterrupted.