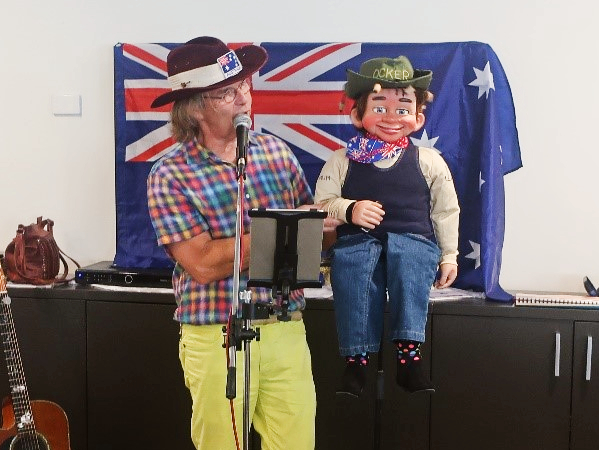 Ventriloquist show with Eric and Sparky

Clients and team members at Arcare Eight Mile Plains were treated to a ventriloquist show worthy of Australia’s Got Talent.

A ventriloquist is an entertainer who can make their voice appear to come from somewhere else, typically a puppet of a person or animal.

And Eric did such a realistic job that he really brought young Sparky to life!

‘I really found that very amusing. He was talking but his lips weren’t moving. It was very good!’ a client commented.

Everyone enjoyed themselves as they watched entertainer Eric and his trusty sidekick Sparky joke, laugh and chat to one another.

‘I feel like I made some good friends today; Eric and Sparky are both so funny, I laughed along to every joke,’ another client shared.

This was truly a unique way to celebrate Australia Day as Eric and Sparky even sang some classic Aussie songs with a twist.

Ventriloquists aren’t very common here at Arcare Eight Mile Plains but clients were very grateful to have been part of a special performance.

They also understand that ventriloquism is not an easy skill to learn.

Besides creating an illusion of sound through speaking, a ventriloquist also demonstrates his acting skills to convince his audience that his puppet friend is alive!

After the show, a few of the clients decided to give their own version of ventriloquism a go.

In the end, they all had a big laugh together as they watched their friends mumble with their lips tightly closed!

Eric and Spark left a strong impression on the clients as their clever and talented performance truly wowed everyone.