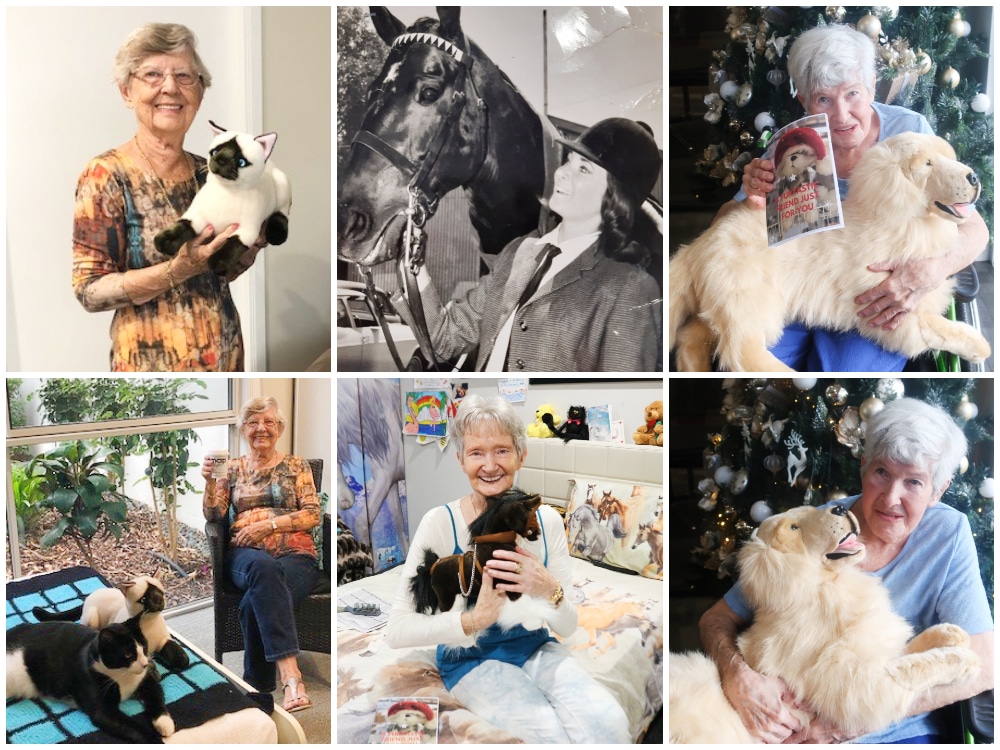 And Lifestyle Co-ordinator Tracey wanted to ensure Daphne had one of her own at the residence.

When a package arrived for Daphne, we all wondered what it could be!

As Daphne slowly unwrapped her gift, out came Spencer the Golden Retriever.

We were all in awe as we admired Spencer’s golden colour and huggable size.

And Daphne was smiling from ear to ear as she cuddled and held onto him tightly.

Spencer’s fluffy ears were soft to the touch and with his pink tongue poking out, who could resist giving him a pat?

Jacki Felder could hardly believe it when Lifestyle Co-ordinator Tadeja presented her with a surprise gift and card.

As she tore through the wrapping paper, a fluffy and soft figure slowly appeared.

Meet Rimsky – a Clydesdale horse who recently retired from his sporting days.

Jacki, who is a big fan of horses actually grew up with these majestic creatures and even competed in equestrian competitions.

“I love animals, especially horses and dogs. I would love to have a horse plush toy with me; it would mean a world to me,” she shared.

As she hugged and combed through Rimsky’s coat, she was amazed at how lifelike he looked with his hoofs and his saddle.

“It is so heartwarming to see Jacki’s reaction to Rimsky. I just knew Jacki would be the right person to receive this Furtastic Friend,” Tadeja said.

You will often find her sitting, cuddling, talking to and sleeping with King.

He is, without a doubt, her constant companion.

According to Valda’s daughter, her mum has always loved plush toys and she even has a big selection of them.

For all of us at Arcare Springwood, we have seen how Valda’s face lights up when she is with King and just how happy he makes her.

Valda’s family has also expressed to us that King brings a sense of happiness and comfort to their mum.

“This gift has made a difference in mum’s life and that really means a lot to us,” they shared.

Seeing their interactions also inspired the family to write a heartfelt letter to Bocchetta Plush Toys to thank them for their Furtastic Friend.

Ever since receiving Amelia, resident Dianne in our Taigum community has formed a wonderful friendship with her.

Amelia has even become fast friends with Dianne’s other cat Zoro.

Dianne was selected to receive a Furtastic Friend as she loves cats and loves to be comforted by a fluffy creature.

Her daughter, Julie was also present as she watched in excitement as her mum unwrapped the gift.

This initiative was part of local company Bocchetta Plush Toys’ aim of bringing smiles to aged care residents throughout Queensland.