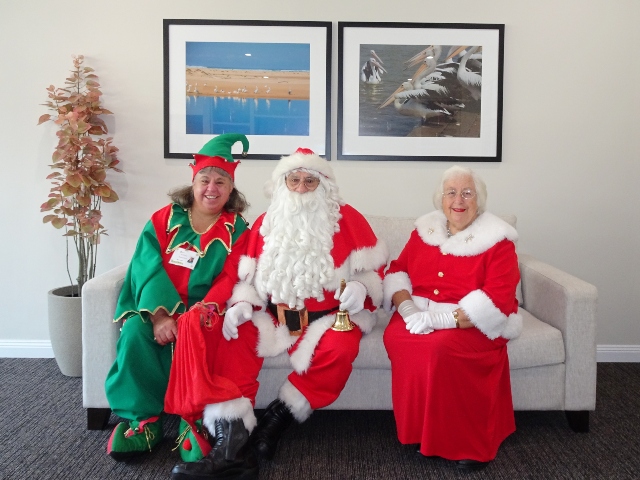 Client Paul Arkley at Arcare Kanwal has been dressing up as Santa Claus since 1991.

It all started when no one wanted to dress up as Mr. Claus for Christmas during one of their Social Clubs.

For the last 15 years, he has been visiting different aged care residences and local hospitals to spread some Christmas joy to the sick children and the elderly.

Paul’s wife and one of their kids also decided to join in the Claus family by dressing up as Mrs. Claus and an elf.

They do not accept any monetary payment for their efforts but instead ask everyone to donate to the John Hunter Children’s Hospital.

Paul shared with us that he missed being Santa Claus last year as his health had turned for the worse.

However, the lifestyle team at Arcare Kanwal encouraged him to do it this year and at first, he refused as he was worried he might not be able to stand very long or move around without his walker.

He simply did not like the idea of being Mr. Claus with a walker.

But with much encouragement and planning with the Arcare Kanwal team, he finally agreed to be Mr. Claus once again.

After the three-day event, Paul was well and truly exhausted but stated that it was all worth it.

‘It was nice to be able to make everyone smile. I feel like I’m back to my old self again!’ Paul shared.

He also added that it gave that sense of confidence again.

When asked about his favourite part during Christmas, he said, ‘I am overwhelmed with emotion when someone walks up to me and gives me a hug. I just love seeing the joy on their faces.’