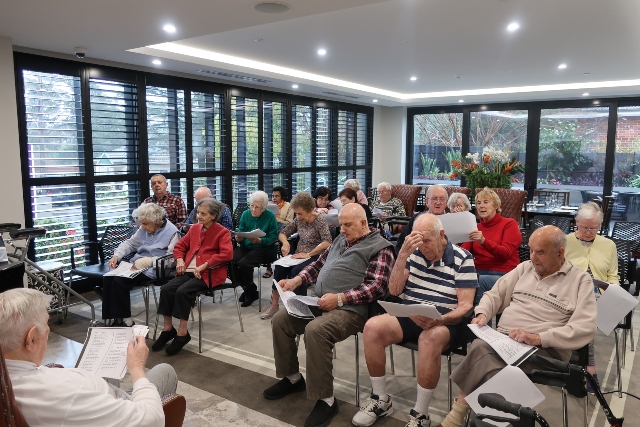 The residents of Arcare Oatlands had been talking amongst themselves lately about starting up their own Choir, after many discussions a small group decided to take on the challenge and make it happen.

To get the ball rolling John Passmore was pointed chiro lead which meant he would oversee a lot of the organisation such as choir meetings and locations etc but, everyone felt John was the right man for the job.

Now that the lead position was filled, Harrison Gee would be the groups pianist as he is very talented and performed many times for the residents.

The group decided that the ultimate goal would to be to perform for the other Arcare locations. As the choir has only recently formed, they have only practiced a couple of times, but many had previously been in choirs and bands and are already enjoying the experience.

One the day of the first choir meeting, community members were in having a coffee in the café who would hear the group practising. They have said that they would like to come back and take part in the chiro themselves as they could hear how good they were and the amount of fun everyone was having.

The residents are now researching new songs, talking about it during their mealtimes and trying to encourage more others to get involved as they want the chiro to be as big as possible.

Currently the choir is working on Christmas carols to perform at their Christmas party in front of friends, family, staff and other residents.

Emma Henshaw was appointed Community Marketing Officer of New South Wales at the end of July 2019. Emma joins the team with a varied background in both Marketing and Communications from a range of different industries which has allowed her to grow and develop her skills, equipping her to take on the responsibilities as Arcare’s Community Marketing Officer New South Wales. Emma graduated from secondary school in 2008 from Bede Polding College, New South Wales. Emma went on to continue her studies and obtained qualifications in Events Management, Marketing and is currently completing her Bachelor of Communication majoring in Public Relations from Swinburne University. Emma is enjoying the new role and learning just how rewarding working in Aged Care can be. She is passionate about building stronger relationships between residents and the wider community and is committed to creating compelling strategies to achieve this. Emma also understands the importance of keeping family and friends up to date with the lives of their loved ones currently enjoying life at Arcare though regular communication via Facebook, the Arcare website, Arcare 5 Star Magazine and soon the Arcare App.