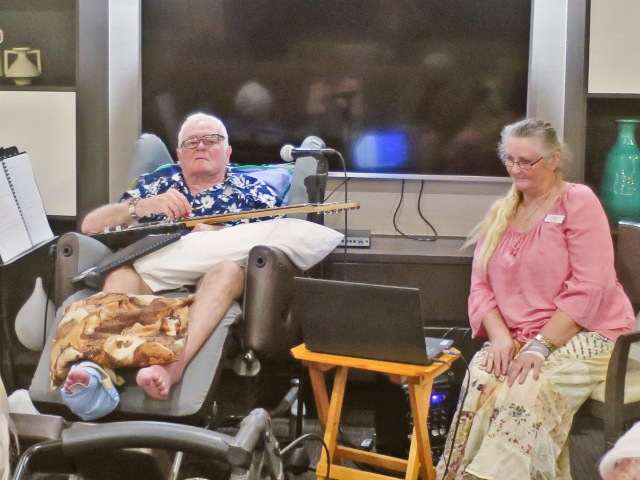 A great comeback for a great musician at Arcare Caboolture

In his younger days, one of the clients at Arcare Caboolture, David West, was a great musician.

He played in different clubs and pubs where he would entertain the crowd by singing and playing on his guitar.

However, due to his poor health, David has had trouble with his memory and his ability to use his hands.

This was a difficult time for him but he never gave up!

He practiced and practiced and he made a promise to lifestyle coordinator, Sue that when he is feeling better, he will put on a special performance for all the clients and team members.

On Wednesday the 4th of September, David was finally feeling better.

And now it was his time to shine!

For the first time since coming to Arcare Caboolture, 72-year-old David put on a great show for everyone.

This was a great boost for his confidence as it had been a while since he performed in front of a crowd.

But his face shone and his eyes lit up when the everyone sang along and clapped loudly for him.

“I was very nervous at the beginning, but I feel so much better now after performing! When can I do that again?” David excitedly said.

We are all very proud of David for putting on such a great performance and for overcoming his obstacles.

Being part of a supportive and caring community has definitely helped David to gain his confidence and chase his passion once again.

We hope to continue encouraging David (and everyone else!) to sing his best, play his guitar and confidently play for everyone at Arcare Caboolture!