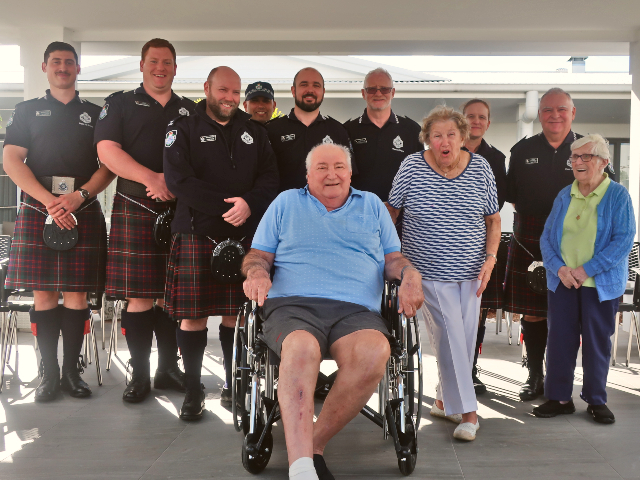 It was on the Bucket list of many of Arcare Pimpama‘s clients to receive a visit from the Police Pipe Band. Today, they were able to tick this off their bucket list.

During their visit, team members and clients got to learn about how the band was formed:

“The Queensland Police Pipes & Drums (QPP&D) was originally formed by then Constable 1/c Nev Montgomery, a keen and committed police officer who had sought to establish a Pipe Band to both represent the QPS and compete in pipe band contests since 1956.

In early April 1958, Commissioner Frank Bischof formalised his approval. The first practice was held in the Police Youth Welfare Association building at Lang Park on June 12, 1958.

Their first public appearance was a swearing-in ceremony at the RNA Grounds on 29 August, 1958. The first performance in​​​ their new band uniforms was the Australia Day Procession, 26 January, 1959.”

They also learned about the Gaelic kilts they were wearing, clients were surprised to learn the cost involved in making these and it opened up conversations about our client’s homelands and heritage backgrounds.

The Police Pipe Band strongly believes their connections and interactions with the wider community is a powerful asset in strengthening and maintaining positive and inclusive relationships between the QPS and our diverse communities.

Overall, everyone who attended immensely enjoyed the performance.

Member of Police Pipe Band said, “The Arcare team members do an amazing job for our seniors living in senior communities, we are happy to be part of this and we will definitely come back.”

Clients and team members were raving about the performance and it was laughter all around with feet tapping to the music.

Pamela Rodgers was thrilled about the experience! “It’s incredible that the police can donate their time to come and play for us. It was so thoughtful and kind and not to mention they sound amazing too!” she said.

What a wonderful experience it is to have the opportunity to fulfil clients’ goals and wishes.

Beverly Edwards was one of the very many clients who enjoyed listening to the band play. “This is incredible!” she stated as she danced in her chair.