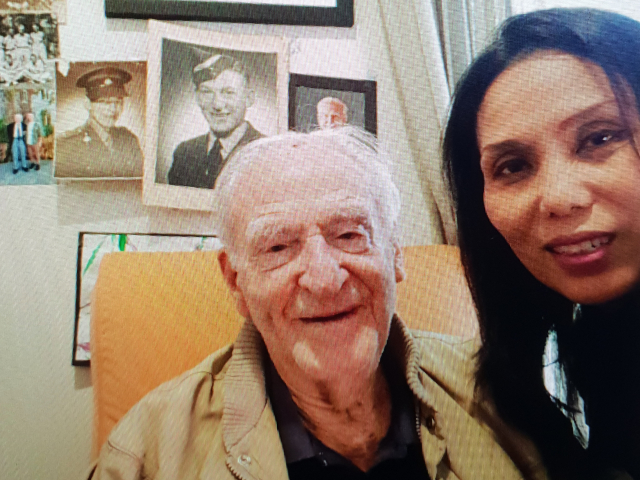 Victoria - Arcare Carnegie - A person who has inspired me

A person who has inspired me

I am employed at Arcare Carnegie, which is an aged care residence with 120 suites. The clients come from a variety of places and backgrounds; one who has particularly attracted my attention is Maurice Smith.

What interests me about him? Compared with the other clients, he is extremely active, not only within the Arcare environment, but also outside of it. His cognitive skills remain very sharp, and I must give him the thumbs up in terms of how he approaches his daily life. His age is no obstacle to his daily activities, including participating in all manner of charitable functions. His independence is exceptional.

I feel extremely privileged to have come to know Maurice in depth. I have visited him on three occasions during my rostered time off work. Indeed, not a vast amount of time, but sufficient to hear him relate many interesting anecdotes from his life.

Maurice was born on 15 November 1923 into a Jewish family, being the youngest child and only male among his siblings, with four older sisters.

He was brought up in Middle Park in a very harmonious family. Being of Jewish descent, Maurice and his family participate in a number of rituals such as worshiping at the synagogue in Toorak Rd, South Yarra.

His family celebrates the Jewish festival of Pesach or Passover to commemorate their liberation by God from slavery in ancient Egypt. They eat traditional flat, unleavened bread. During the 8th days of Passover, they also observed the day of atonement which is 24 hours fast day.

During his childhood, every summer Maurice loved to cycle, usually from Middle Park to Frankston, swimming on the beach or playing cricket and in winter he loved to play football

In 1950, Maurice married Rachel Crafti, a Queensland girl who was discharged from the R.A.A.F in Melbourne to live with her married sister. They were married in Queensland. They met at a social tennis club in Elwood, where they were both members.  One son and two daughters resulted from their marriage. There are eight grandchildren; seven male and one female. The granddaughter is now employed as a teacher in Israel. One of the grandsons is working as a physiotherapist for a football club in the USA, and lives in Baltimore with his wife and 7 years old child. Another of Maurice’s grandsons works as the legal officer to the Australian Grand Prix organization.

Another grandson lives with his partner on the Gold Coast.

Another of Maurice’s grandsons, approximately 30 years of age, suffers from a rare skin disease. Due to this, he was invited to participate in a dermatology conference in the USA, and has established a fund-raising charity to this end.

Maurice and his wife Rachel’s first home was in Grandview Grove, Carnegie. They lived there for 17 years, after which they moved to Caulfield, near the corner of Hawthorn and Balaclava Rds, where they remained for some time before finally moving to McKinnon Rd, Carnegie.

Maurice has many fond family memories, including swimming at the beach and holidaying at Rosebud. At Christmas they enjoyed joining with their neighbors for a community party in their Mc Kinnon days. Maurice he also enjoyed watching the big bash cricket game, while holidaying in Inverloch with his eldest daughter.

Rachel has been the supreme woman in Maurice’s life. They enjoyed doing many things together, such as going to parties, a dancing club, the theatre, playing tennis and golf, or even doing household activities together such as gardening, having barbeques and doing the washing. Maurice remembers Rachel as someone skilled at cooking. He particularly misses her chicken soup and roast turkey, which took her at least five hours to cook on festive occasions.

With Rachel, Maurice visited many places, including Queensland, Fiji, Hawaii, USA (San Francisco and Los Angeles), Canada, UK, South Africa and Israel. He has visited Israel twice during his lifetime, firstly in the 1960s, and again in the 1970s.

One unforgettable memory with Rachel, was when Maurice spent time during his retirement at Magnetic Island and Townsville in North Queensland during winter.

Maurice’s final memory of Rachel is when they moved from McKinnon Rd, Carnegie to Arcare in 2009, where Maurice now lives. The decision to move was made, due to Rachel’s deteriorating health. They lived together at Arcare for almost a year, before Rachel passed away in June 2010, just prior to their 60th wedding anniversary.

Among Maurice’s many hobbies, sport is the stand-out. At the age of 12, he won second place in the Victorian breaststroke swimming competition. He has been a member of the Melbourne Cricket Club (MCC) since 1934, a period of almost 84 years. He is also a fan of the Sydney Swans AFL football club, previously known as the South Melbourne Football Club. Maurice is extremely lucky to have witnessed three premierships, in 1993, 2005 and 2012.

From the point of view of education, Maurice was fortunate. Whilst at Middle Park Central School he won a government scholarship to Scotch College where he played cricket and football and obtained leaving honours.

Although he had volunteered and been accepted for training as Aircrew he was compulsorily drafted to the army as a soon as he turned 18, but shortly after the Airforce claimed him. He was mustered and trained as a Wireless/Air Gunner under the Empire Air Training Scheme. Initial training was in Australia and then he trained in Canada (Alberta and Saskatchewan) with temperatures below 20 degrees. He was then posted as an instructor to a Navigator’s school outside Montreal. Finally he was posted to the United Kingdom, where he was crewed up with an Australian pilot and five young English members of the R.A.F. Originally they flew together in a Wellington Bomber. They successfully converted as a crew into flying Lancaster Bombers but before they could be posted to a squadron, the official V.E. Day 8th May 1945 was declared. However, they were able to go on a mercy mission dropping food to the starving Dutch and bringing back P.O.W’s from Germany.  Maurice returned to Australia in early 1946 and was discharged as a Warrant Officer.

Soon after he returned to Australia, Maurice entered Melbourne University for his Bachelor of Commerce course and graduated in 1948. At the same time he completed his Taxation studies to become an Associate of the Australian Society of Accountants.

He worked for Colonial Mutual Life Society Ltd, in an Executive Management Training Scheme in 1949 and held appointments at the Head Office in Melbourne in the Accounts and Investment department, culminating as the Chief Investment Manager of C.M.L. This appointment arose after various stints in the overseas branches of the organization in New Zealand, Fiji, South Africa, Southern Rhodesia and the UK.

In 1988, he retired, but in 1989 he returned to work as a Consultant with the Collier Charitable Fund up to year 2000. (Indeed, one of his neighbours commented that Maurice never actually retired and referred to him as Mr. Semi-Retired).

He is still active, spending his time doing things he enjoys. Maurice continues to diligently read the newspapers and watch the ABC News 7.30 Report to keep abreast of current affairs.

He visits a physio on a regular basis to have a back massage. This keeps him going to play social bowls twice a week with friends.

On Wednesday and Friday mornings, he participate in Live Longer, Live Stronger exercise at the Community Health Centre in Bentleigh.

Every Friday, he has lunch outside and then enjoys the Happy Hour at Arcare, which usually begins at 3 pm, and then at 5.45 he participates in a religious ritual ceremony, the Lighting of the Candles, to mark the beginning of the Sabbath.

Almost once a month, Maurice accompanies a friend at a film performance. One of his favorite theatres is the Palace Theatre in Bay Street, Brighton.