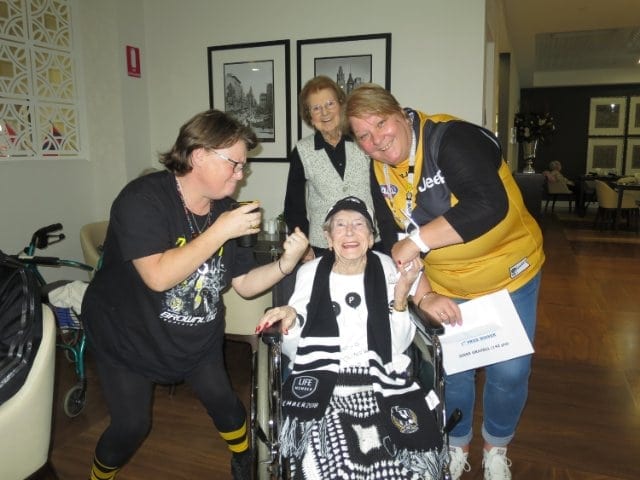 The Cheltenham Community had been gearing up for the AFL grand final all week in the lead up to the big day.

For Marie, this years’ celebrations were of particular importance as her beloved Collingwood was into the grand final.

Marie, whose husband was the team trainer from 1954 – 1979, is a lifetime Collingwood member and will stick with the team through thick and thin.

Marie participated in the 2018 tipping competition and was pleased to do well in her overall results.

It was Dorothy, though, who took out first place.

Dorothy used to be a Melbourne supporter but changed to Richmond as her family all barracked for Richmond.
As neither team played in the grand final, Dorothy supported Collingwood instead.

A number of different AFL teams are represented in the Cheltenham Community: Marjory follows St Kilda, Norma for Geelong, Don for Richmond, John for Carlton, Jim for Collingwood and Yvonne for the Western Bulldogs.

The Collingwood supporters were sad to see their team lose to the West Coast Eagles in the final game of the season but were impressed with the exciting game of footy.