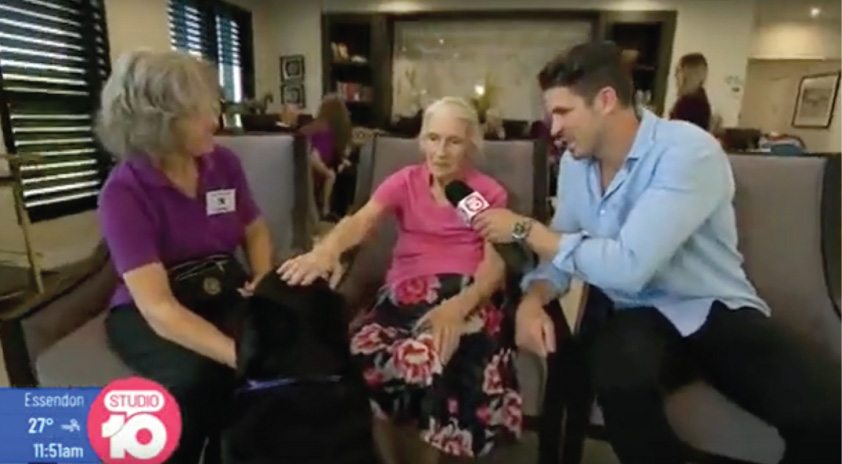 Imagine being afraid of something for more than 88 years and then facing that fear head-on at the age of 94. Client Mona did just that! Sandra, from the Hills Pet Buddies, frequently visits Glenhaven with a much-loved black Labrador named Maple. During this visit, team members thought it would be lovely if the pair could visit Mona, who often likes to stay in the comfort of her own suite.

When approached to see if she was up for a visitor, Mona said that she was afraid of dogs. Sandra suggested just showing Maple to Mona, as this had been successful in helping others overcome their fear of dogs.

‘It’s often a bad experience with a dog that spoils the opportunity for people to enjoy the companionship and love that dogs offer,’ Sandra said. Mona explained that she had been bitten by a dog when she was six years old, which had led to a lifelong fear. From the door, Sandra explained that Maple was a therapy dog. This meant she was very well trained and would not bite, and Sandra asked if she could bring her Maple closer.

Sandra positioned Maple so her face was away from Mona’s hand. Mona began gently patting the back of Maple’s neck. At first Mona was hesitant, but once she felt Maple’s soft fur she began commenting on how good Maple was and that she felt so soft.

Maple slowly began to turn around until she was facing Mona and sitting next to her feet, while Mona patted her head and ears with no hesitation. Sandra and the team members kept commenting on how brave Mona was to pat the dog and how proud she should feel for overcoming this fear in one try.

At one-point Mona said, ‘She looks like she is smiling at me, oh what a sweet dog she is.’
When asked if Maple could visit again, Mona said, ‘Yes please, I enjoyed seeing Maple very much. I never thought I would have been patting a dog today.’

Just goes to show that you are never too old to overcome your fears.