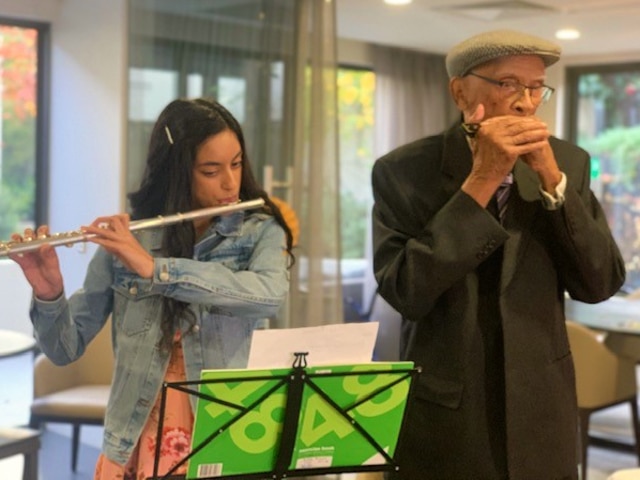 On Saturday 30th May, the Arcare Surrey Hills community celebrated the 100th birthday of their very first centenarian, Ligorio.

Ligorio was born on 30th May 1920 in Goa, India. Ligorio is the youngest of six children (4 brothers and 2 sisters).

Ligorio completed his schooling in Goa, a Portuguese colony of India and matriculated learning Portuguese as a second language. During World War II, Ligorio joined the Indian Navy.

Ligorio worked in Pakistan for a year, before moving to Nairobi in East Africa in 1948. He worked as an Accountant for the British Police Headquarters in Nairobi for 24 years from 1948 to 1972.

Ligorio travelled through various districts for work in the African region during that time, and enjoyed the adventure. At the age of 33, Ligorio married Valdemira, the love of his life and was blessed with four children, all born in Africa.

Ligorio’s three daughters all chose to settle down in Australia, and he his only son resides in the UK with his family. Ligorio is blessed with 8 grandchildren and 5 great grandchildren.

Ligorio retired from the British Police department in Africa and returned to Goa, India in 1972 with his family. He kept himself busy by doing volunteer work and later became the local Councillor (also known as a Sarpanch) for Aldona, the village that he settled in North Goa.

Ligorio contributed to the community by helping to improve roads, providing electricity, water and gas supply to the village and to date is remembered very fondly by the local residents of his Council.

In November 1992, Ligorio’s beloved wife, Valdemira passed away at the young age of 64. It was then in 1993, that Ligorio chose to migrate to Australia, at the age of 73.

20 years ago, in the year 2000, Ligorio at 80 years old became an Australian Citizen. He has lived in Endeavour Hills, Melbourne for the last 27 years and became a member of the RSL in Dandenong. At the RSL Ligorio took up his new passion – playing pool.

Ligorio in his younger days was a great sportsman and won trophies and medals for long and short distance running, high jump, cycling and football. He is a multi-talented man, who can sew till today using the good old “Singer machine”, he is good at woodwork & carpentry and has created some wonderful pieces of art for his family. He loves music, still plays the harmonica, and he loves dancing!

Ligorio has lived independently for the last 15 years, shopping for himself, cooking and cleaning, until the age of 98, where it was only in August 2018 that Ligorio moved into Arcare Surrey Hills. He is a kind, soft spoken gentleman and an inspiration to many.

The Surrey Hills community celebrated Ligorio’s birthday on Friday 28th May, by hosting a special Happy Hour in his honour.

Everyone enjoyed some Indian finger food and a slice of delicious cake, prepared by onsite head chef, Alessio.

Ligorio and his granddaughter entertained the crowd with their music and sang us some of their favourite tunes.

Children from the local Florence Road preschool made Ligorio special Birthday cards and pictures, and even chose to deliver them to the door of the residence. The children sang Happy Birthday to the 100 year old from a distance, which brought a gleefully smile to Ligorio’s face. Ligorio has developed quite close bonds with a number of the preschool children during the community’s intergenerational play group program, so their visit and cards were especially meaningful to Ligorio.

It was a lovely afternoon enjoyed by all, especially Ligorio who read a wonderful speech thanking everyone for their love and support. 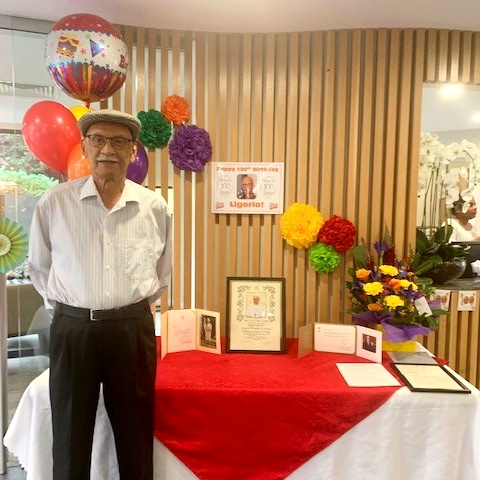 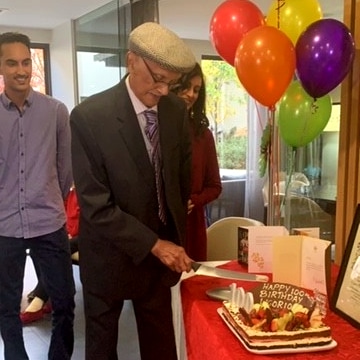