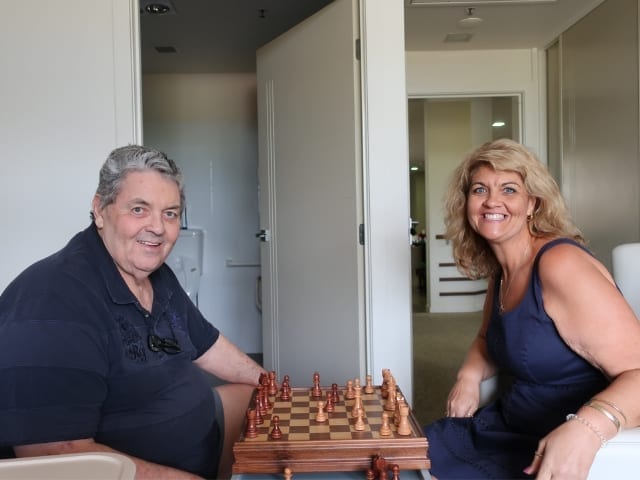 These two were brought together by a common interest in chess and that is where it all began.

A friendly game developed into a friendship based on mutual respect and shared sense of humour.

Mark is a retired serviceman who has taken the move into Arcare Helensvale in his stride.

He calls a spade a spade but is very quickly to pass on many compliments to our fabulous catering team, hard working lifestyle coordinator and the caring personal support workers.

Mark and Kim have played rigorous games of chess where they chatted swapped life experiences and discussed current events, which would distract Mark allowing Kim to sneak some wins passed him.

These two also collaborated on Marks speech for Remembrance Day at Arcare Helensvale.

The pair worked over a few weeks researching and typing up Mark’s speech.

This was a tremendous step because it was the first time Mark had spoken in front of the other clients sharing his words and setting the tone for the ceremony.

Through discussion at various catch ups Mark and Kim became aware they had a love of great food, family and Cribbage which is an old-time card game, so they decided to give it a try.

Considering neither had played this card game in a long time it was like the blind leading the blind.

But in true military form Mark researched and refreshed his memory so that they could lead the way in helping Kim remembering how to play.

Much to Mark’s dismay Kim has this magical ability of winning at this game so needless to say Kim enjoys this immensely and like a true gent Mark takes it in his stride.

Mark is also visited by a younger gentleman who joins Mark for a game of chess which has enabled them both to stimulate their minds while sharing a laugh and a good chat.