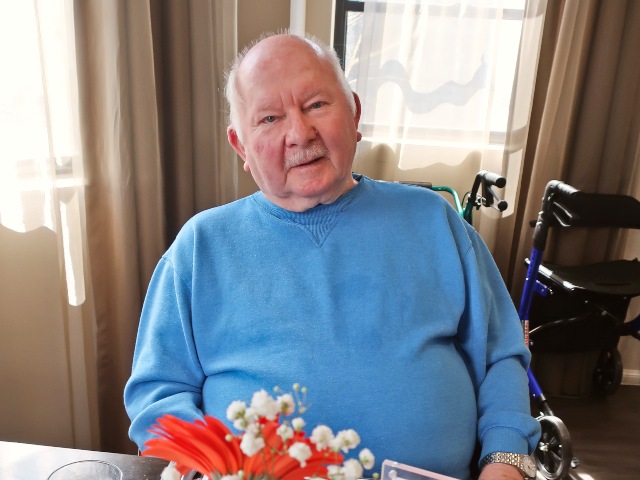 Here at Arcare Helensvale St James, we celebrate the meaningful lives the clients have lived and we hope to share their story with many others.

Born in Zwettl, Northern Austria in 1936, Alf’s childhood memories were very heavily influenced by the tragedy and hardship of WWII.

The war was a very bad time for Alf as he was separated from his Mum and Dad and he lived with his Grandma in Austria for many years.

His grandma raised him for many years during and after the war.

“She was a very good lady” Alf stated very fondly.

In 1945 when the Russians moved in, Alf made friends with the Russian cook and helped with odd jobs like chopping firewood.

This allowed him to get food for himself and his Grandma. Food was extremely scarce or non-existent during these hard times.

One story that brought a little smile to Alf’s face was when the German soldiers were retreating, they literally dropped everything to escape and left behind some interesting and useful.

One item Alf was lucky enough to come across was a small suitcase full of tobacco that fell off a retreating truck. He was able to trade the tobacco with local farmers for food.

The war taught Alf to learn to fend for himself and to adapt to circumstances and surrounds.

During Christmas in 1945, Alf recalled queuing up from 5.30am to get some bread. Although he was lucky enough to get some bread, he dropped it on the way home. The bread was of such poor quality that it just crumbled into pieces.

During the school holidays in the early years in Zwettl, there was a cabinet maker who had his own shop. Alf worked for him and learnt about polishing and furniture. Little did he know this was where it would lead him in his later life.

Shortly after the war, things started to get better and eventually Alf moved to Vienna to ‘Hotel School’ for 12 months as he studied to be a chef. After Hotel School, he worked in restaurants to gain experience.

The chefs had their own sort of union, and soon, word spread that if anyone was interested in going to Australia, they had the opportunity to go to the Olympic Games in Melbourne.

In 1956 at the young age of 20, Alf ventured to Australia and was hired by the Australian Government during the Olympic Games.

Alf made the decision to stay in Australia and he stated that “it was the best move of my life!”.

When Alf arrived, he seriously studied how to read and write English, and soon he was helping others.

A move to Leura, Victoria for a position as a chef came after the Olympic Games. The food industry in Australia was behind the European scene, and it was difficult to find a good placement.

Alf cherished the time he spent working for two of the best restaurants in Sydney at this time.

Times were pretty tough in the food industry, so Alf made the decision to do something different.

Using the skills he had learnt as a boy, he started a job polishing furniture at Parker Furniture. “Mr Parker was a very good boss”, Alf commented.

One Christmas when Alf was working extra hours to earn more money, Mr Parker said “I don’t think you are the type to work in the factory for the rest of your life”. And Alf agreed with him.

After about 12 months, Alf approached management to see if they were ready for him to take on a higher role.

They suggested he take on a salesman role for 12 months to gain some experience under his belt. However, the interview did not go well so Alf sought out another company.

This time, it was with another top furniture maker in Sydney – Anthony Audin. After a successful interview, Alf started work straightaway as a furniture salesman.

From selling all types of household furniture and topping sales for the first 7 months, Alf stayed there for 2 years, learning and working hard.

It took a lot of work, but Alf was very keen to succeed and he took great pride in his work. Alf wanted to grow so he moved onto Framac.

When Alf started at Framac, there were eight people in the factory. When Alf finished, there was over 100 staff.

Alf worked there for the rest of his life, always maintaining an excellent work ethic and an eagerness to learn and innovate. Soon, he worked his way to Director and General Manager of the company.

There was expansion, new branches overseas, and patents of furniture designs for the unique designs that they came up with. They were also able to sell these patents to other furniture makers internationally.

To this day, Alf remains a part of Framac, a company that he has helped to build to great heights because he was always thinking ahead and outside of the box.

In amongst all of his career successes, Alf’s biggest success was meeting his wife when he was 26 years old. They got married in 1961 and have 2 daughters and a son.

It was only towards the end of his working life that they moved to Queensland.

His wife still lives on the wonderful 100-acre property they purchased nearby and now she shares the property with their daughter and son in-law.

Alf is still writing the next chapter of his life.