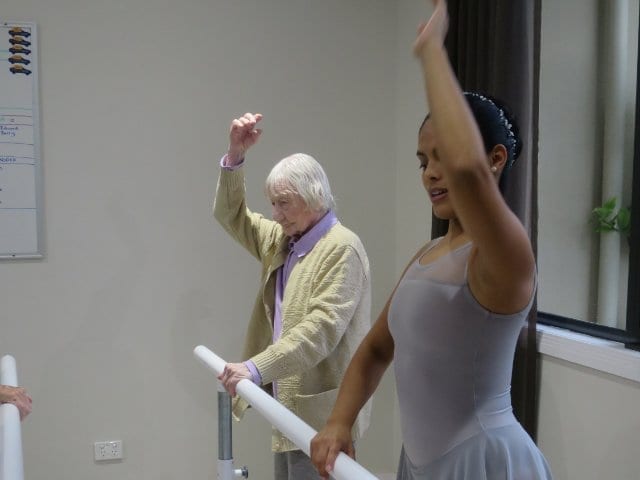 Lorna Sweet, born in 1923, boasts an exuberant childhood riddled with the pleasure of the arts. Lorna began dancing at the tender age of nine. An era plagued with the inescapable misery of The Great Depression, a teary-eyed Lorna reminisces that ‘money was tight, but mum always found the money to send me to dancing!’ It was this kind of familial support that propelled Lorna during her young dancing career. Young Lorna indulged in the arts at the homely dancing class in North Fitzroy, run by the two DeNiero sisters.

A keen competitor, Lorna took part in tournaments often around Victoria, proudly representing her troupe and her beloved teachers. Victorious more often than not, Lorna speaks dreamily of the repertoire of medals she has displayed around her home. However, held to her heart more dearly than the medals themselves, or even the notion of victory, is the memory of her lifelong friend, Eva Gretricks. Partnering with Lorna throughout her dancing career from ages nine through 17, Eva is held in high reverence. A beyond-talented dancing duo, with the inseparable bond of best-friendship, they were a fearsome duo.

Lorna’s dancing concerts, held frequently in the grandiose Northcote Town Hall, were undoubtedly a sight to behold. Lorna was a jack of all trades but, opposite to the phrase, was a master of all. She enjoyed ballet, tap dancing, acrobatics, and toe dancing. Not to be a mere ‘twinkle-toes’ though, Lorna also sung!

It wasn’t always fun and games on stage for young Lorna. She spoke in light tones of an occurrence where, at the time, light tones would be scarce. During practice, Lorna was in motion of completing the fabled ‘chest roll’. A move of acrobatic ingenuity that the mere mortal wouldn’t dream of attempting. It seems that what ten-year-old Lorna boasted in acrobatic aptitude, she lacked in spatial awareness. Upon landing, Lorna slammed her head into the edge of the mat; a hard, unforgiving place, and as a gruesome result, had her teeth pierce clean through her tongue. Chuckling now and displaying the scars, Lorna reminisces about the misfortune she encountered with several doctors refusing to treat her, due to her lack of money. Eventually, though, Lorna was attended to, and received the medical attention she required, finally acquiring stitches. This night just happened to be the one night that Lorna’s mum was unable to make it to her practice. Unknowing of Lorna’s mishap, upon opening the door in the middle of the night to her bloody-mouthed ten year old daughter, and the overwhelming odour of chloroform, she proceeded to promptly faint right in the doorway.

Lorna’s memory of her mother is shrouded with adoration. Coupled with that adoration, though, are nagging questions of blood lineage and belonging, that will forever remain unanswered. Lorna was raised throughout her entire childhood through marriage by a set of parents she labelled ‘wonderful’ and ‘incredible,’ who provided her with an ‘amazing childhood.’ What she found out at age 24 did not waver that opinion but did raise more questions. Lorna was adopted.

Lorna titled her discovery of this a ‘shocking blow,’ but more impactful than the news itself, was the shocking way she came to find out. Lorna’s mother and her sister, Lorna’s aunt, had most unfortunately found themselves in a serious dissension; as siblings do.

The aunt, in a last ditch, low-blow attempt to retaliate at her sister, turned to her 24-year-old niece Lorna and followed the forever daunting phrase of ‘I have something to tell you’, with the news. Lorna’s mother, who undoubtedly had no intent on having Lorna find out this news, collapsed out of emotional agony.

The daughter she raised was noble and wholehearted though. Lorna, despite being heartbroken and swayed by the news, decided that she didn’t want to pursue a meeting with her biological parents because she was ‘cared for and looked after and had incredible parents, and that’s all that matters.’ In due time, Lorna was able to uncover that her biological mother had conceived her when she was only 17. At the time, a baby being born out of wedlock in rural Tasmania was taboo to say the least; it was a topic for hushed voices, closed doors and sealed lips. The impracticality that came with raising baby Lorna whilst being in this situation made Lorna more understanding and alleviated any chance of bitterness or betrayal.

After all, would Lorna’s biological mother have introduced her to dance?

Lorna Sweet remembers wishfully about her inability to pursue dancing professionally. A dream too far-fetched, Lorna begun work in a factory when she was 14, while she was still dancing, as a worker who sewed together materials to create shirts, skirts and garments alike.

Weaving in and out of jobs and dance, Lorna’s dancing career eventually ended when she met her husband at age 17. She neither worked nor danced after getting married at age 21, until many years later when she found a job at LaTrobe Univeristy as a house cleaner. Cleaning up after the boys, Lorna chuckles at the memory of seeing sights there that would ‘make your head curl!’

Lorna resides now in the welcoming Arcare Craigieburn. She is an avid reader and an exceptional talker with an incredible story to tell.

After several years, Lorna is now getting back into ballet thanks to the fortnightly classes that are being run at Arcare Craigieburn.

Coffee and chocolates for High Tea at Arcare North Shore

Singing along to country music at Arcare Helensvale

Farewell to our good friend Haydee at Arcare Helensvale