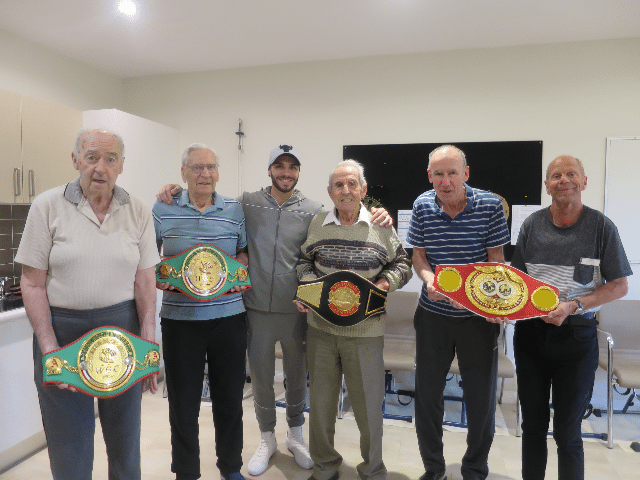 The men from the Craigieburn Community have been enjoying training with Commonwealth champion Michael Zerafa in boxing.

It’s been particularly interesting for Barry ‘Gabby’ Nolan who has an illustrious sporting career.

Here are their stories.

26-year-old Michael is a Craigieburn local and a familiar face with the community at Arcare. Michael is currently training for the Commonwealth World Title in June where he faces a tough competition with Anthony Mundine at Hisense Arena in front of 12,000 people.

Zerafa boasts an incredibly rigorous work ethic. He trains for a total of six hours a day, spread throughout three sessions. Not even Sundays are rest days for Michael, who completes a ‘huge run’ or even a session of yoga.

Michael talks about the perks that come with the controversial and dangerous sport of boxing. The decision to turn professional has afforded him the opportunity to travel, and the list of places he’s visited is impressive. ‘I’ve fought in Japan, Vegas, France, Issue and Russia,’ Michael proudly lists. He adds, ‘after my fight with Mundine, I’m heading to the UK to fight a pommie!’

Fights in these exotic, dreamland locations was not an easy gig to come by for Michael. He has been training since 12 when he started boxing in a local garage under his trainer and friend Sam Andruela.

He says the reason he took up boxing was to start a better life for himself.

Michael fought his way up the ranks, taking part in about 35 amateur fights. He also represented our proud nation at the Commonwealth Games in New Delhi in 2010.

Upon turning professional at 18, he gave up the chance to ever be eligible to represent Australia again.

Michael speaks about his passion for boxing and how he knew as soon as he started that he wanted to turn professional.

He played local footy as an additional sport but dropped that to focus on boxing.

More impressive than his wins is Michael’s demeanor. Michael runs boxing sessions with his local community, for the older Australians, the homeless and disabled children.

We wish all the very best to Michael for his future endeavours and fights, and thank him for his time spent with our community.

Barry ‘Gaby’ Nolan, from Arcare Craigieburn, is man of many well-deserved sporting accolades.

He meddled for much of his life in two sports: AFL and boxing. Despite being his career, Barry admits with a chuckle that he was never initially very good at either.

Barry was not like most young athletes. He picked up the footy at age 14, a lot later than other young athletes. His first real encounter with footy came through St Joseph’s Secondary College in Brunswick where Mr Nolan tried his luck in making the school team.

Barry described himself at this time as ‘no good, too light and with no muscle’.

What young Barry lacked in footy dexterity, he made up for in grit and determination.

It was at this time that Barry started to join boxing sessions at the fabled Mighty Apollo Gym on Little Bourke Street. He began training with Johnny Cooper, a man Barry holds in high revernce for the time he devoted to Barry personally.

At this time he made a friend named Wayne Bannister who is endearingly referred to as ‘Banno’. The story of how they met is a story of true footballing spirit indeed. Banno and Barry had met before, clashing horns several times in previous games for their respective clubs and schools.

Despite his newly accumulated strength and tenacity, Barry was still smaller than the majority of other footballers on the team. This made him an easy target. On one occasion, Wayne fought back after seeing Barry being picked on and, soon enough, they became best friends.

Barry’s first boxing match ended in a draw. Spurred on by the absence of glory, Barry enlisted to fight again a few weeks later.

Despite winning his second match, his boxing career was short-lived when his trainer told him that a life of boxing ‘wasn’t for him’.

He wasn’t discouraged and instead returned his focus to football where his journey began.

This turned out to be a wise decision as he was recruited by the Brunswick ‘Wicks’ of the VFA. To their goof fortune, Barry domninated. In just his second year back from his boxing stint, he proceeded to earn himself the honour of receiving the Liston Trophy in 1978: an award presented to the best and fairest player in the league for that year.

During the next ten years he earned himself the title of one of the legends of the game. Barry’s love for the game was unwavering and continued long after his retirement as a player.

He coached for several years at various clubs around Victoria and NSW.

Barry is a humble and courteous individual who is a friend to many in the Craigieburn Community.