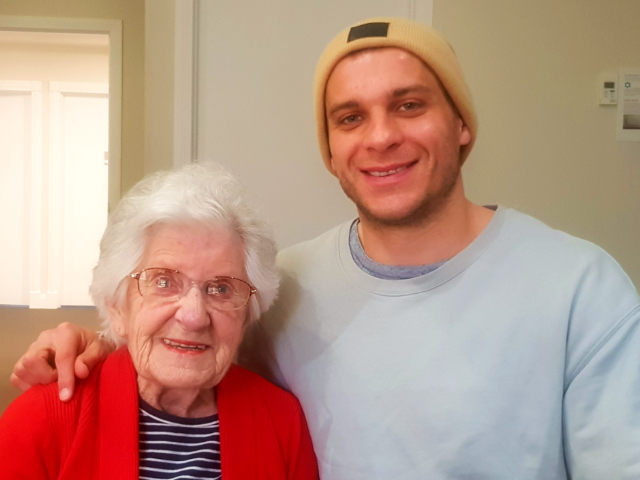 Valda Wass is a 92 year old widow, who has light blue eyes, short silky hair and a warm smile, which is complimented by her delightfully friendly and loquacious personality. Valda currently resides within the Arcare Craigieburn community, and if you were to give her five minutes of your time, you would learn all about her day, the garden she tended to at home, her beautiful collection of shoes and all about her family, who she is immensely proud of.

Family has always played an important role in Valda’s life. She speaks proudly of her family, her daughters and their children. Whenever Valda speaks about her family she always highlights all the small, but touching ways in which her family members have made a difference and how significant they are in the scheme of her life story. Valda is especially proud of her five grandchildren;  three boys and two girls.

One of Valda’s grandchildren is Dion Prestia, professional AFL player for the Richmond Football Club. Boasting a career of 9 years as a professional footballer so far, Prestia debuted with the Gold Coast Suns, before trading to Richmond in 2016. 2019 has been a victorious year for the 26-year old midfielder, who affectionately referred to as ‘Meatball’ by his teammates, and ‘Little D’ by his family.

Even as a child, Valda recalls how Dion ‘always had a football in his hand’. His love for the game is not at all surprising, as their household has ‘always been very sport-minded’; a fact that is attested to by Valda’s walker, as it’s adorned with the Richmond colours and logo. The family never failed to attend the important games and they knew the sport back to front; in fact, Valda’s late husband was an engineer, who also played association football for Northcote in the VFA.

Valda and Dion speak to each other frequently, typically over the phone. Valda loves to hear everything that has been going on in Dion’s life, and Dion likes to remind her to bring her laundry in before it rains; Valda of course, always reprimanding Dion for his cheekiness. ‘That’s the kind of kid he is,’ she laughs.

Valda fondly remembers Dion’s first game as a professional player, where the family traveled to watch the game at the stadium. Nowadays, Valda watches the footy on her TV, which she says is not nearly as enjoyable as the real thing.

Valda was overjoyed when she watched Richmond secure their place in the 2019 Grand Final, as that meant that she was able to watch Dion play in yet another Grand Final.

Valda proudly cheered on her grandson and his team, as they went head to head against GWS Giants in the 2019 AFL Grand Final on Saturday 28th September. Valda sat proudly, wearing her yellow and black assemble and Richmond scarf, as she watched the game. Valda can’t wait to give Dion a congratulatory kiss and cuddle next time he comes to visit, as Richmond were victorious over GWS, winning by 89 points.

Congratulations to Dion and the Richmond Tigers for their spectacular win! Go the Tiges! ????

Doreen creates her own colourful gremlins at Arcare St James

Painting with Anja to create an abstract, colourful canvas

A friendly match of balloon games at Arcare Oatlands