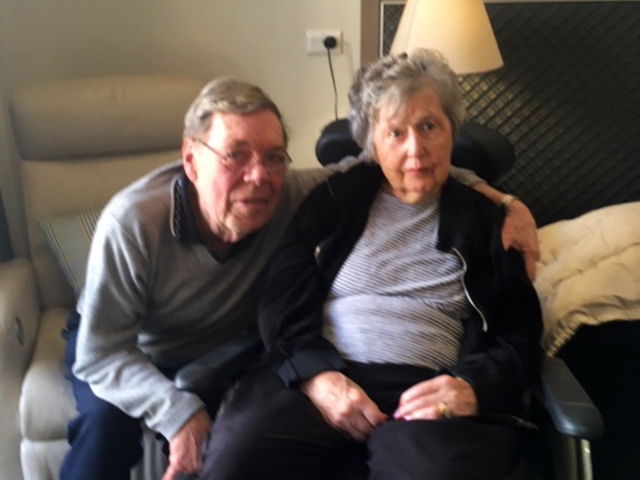 A love story for the ages

Margaret was born in Glen Huntly, Victoria in 1938.  Her parents owned Abbott’s Pharmacy.  Margaret went to MLC Cato from prep to matriculation, it was then she became a trainee nurse at The Alfred Hospital.  Eventually, Margaret became an ENT Theatre Sister.

When Margaret was young, she decided to go on a cruise to the Far East, it was there she met her future husband, Bill, who was the engineer on the ship.  The Shipping Line was an English based company in Hong Kong.  The cruise travelled from Melbourne to Sydney, then Brisbane, Papua New Guinea, Philippines, Hong Kong and then to Fremantle.

The pair fell in love on the cruise, however once it was over, Margaret went back to nursing and Bill continued to sail with the cruise, as he still had two years left on his five year contract.

To be closer to Margaret, Bill transferred to a ship that sailed out of Sydney.  Bill would then fly down to Melbourne, to be with Margaret.  That was how he spent his last two years with the cruise liner, going in and out of Sydney.  When Bill finally completed his contract, he came to Australia for good in 1964.

Bill then worked as an Industrial Engineer for Joseph Lucas Pty Ltd in Cheltenham.

Soon after Margaret married Bill and they had 2 children, a girl, Amanda and a son, Simon, who were 18 months apart.

After having children, Margaret retired from being a nurse, and fell in touch with her creative side, taking up painting and drawing.  Margaret had always had a passion for the arts, however her parents wouldn’t allow her to go to art school, as in those days, girls could only study teaching or nursing.  She also had a love for crafts such as stained glass, intricate embroidery, decoupage, she even made the children’s clothing. It was Margaret’s creativity that inspired her daughter, Amanda to go on to study art and become an art teacher.

When Simon was four, Margaret was requested to fill in for six weeks at Brookville Kindergarten in Toorak, however she ended up working there for 22 years, as she fell in love with the job.

Margaret’s parents died when her children were young.  Her mother died first, and shortly after her father died from a broken heart.  Margaret has a wonderful connection with all her family and puts them first.  When her aunties became sick, she took on being their carer.  She would wiz down to Prahran to cook for them and make sure they were ok.

In 1980 her husband Bill opened a plastics factory and its employees grew to 120 people.  The company is called BMW Plastics – initials for Bill and Margaret Wiseman.  Their son, Simon also joined the company and played an important part in developing their client base.

Margaret and Bill now have five grandchildren of their own, who they range between 19 and 14 years old;  four boys and one girl. Margaret loves spending time with her grandchildren and being involved in their lives.

Margaret is a quiet person, but she has a big heart.  Throughout her life, Margaret has made friends through her various experiences. For example, Margaret made many friends from her years teaching English to migrants and also from the Kindergarten, where she worked at in Toorak.

Throughout their marriage, Margaret and Bill travelled extensively, with Margaret has visiting over 40 countries and Bill visiting 58 different countries.

One of the hobbies that Margaret and Bill enjoy doing together, is antique collecting. One of their most prized possession is a stuffed fox in a riding outfit.

Margaret and Bill lived in the same house in Armadale for 55 years.  Bill still resides there today, however Margaret now resides at Arcare Malvern East.

Margaret was diagnosed with MSA Parkinson.  The diagnosis took a long time, with Margaret having to visit multiple doctors to find the answer. Multiple system atrophy (MSA) is a progressive degenerative neurological disorder that affects adult men and women, usually in their 50’s or 60’s. The clinical features of MSA overlaps with those of Parkinson’s disease, and for this reason, early cases of MSA are often misdiagnosed as Parkinson’s disease. As a result of Margaret becoming ill, the couple decided to sell their business to focus on each other and Margaret’s health.

Almost every day you can see Bill and Margaret somewhere around Arcare Malvern East.  They are a truly amazing couple, whose love is for the ages.