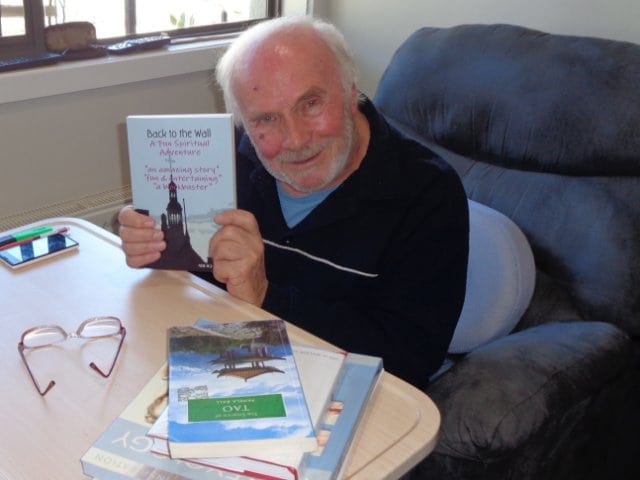 Victoria Aged Care » Portarlington » Back to the Wall

Back to the Wall

Neil, a client at Arcare Portarlington, shares stories from his life in his recently published novel titled ‘Back to the Wall’.

Neil began his early working career at several successful ad agencies. He won an award in 1972 for the best TV ad campaign at the Australian National Television Society Awards.

From there, Neil started his own freelance copy-writing business which he ran from his inner city home.

After ten years, Neil was unfortunately declared bankrupt and lost everything including his house, job and wife.

Neil packed up all his worldly belongings and set off to Hepburn Springs in search of a new life.

He went from living in a beautiful home, with a holiday house to escape to on the weekends, to being homeless and unemployed.

It was then, he explains, that ‘amazing things’ began to happen; starting with a kind stranger offering him her caravan to live in.

Neil writes, ‘It’s interesting how, with your back to the wall, you do things, take chances, make choices, that under normal circumstances you would never even consider.’

Neil became well-known around Hepburn Springs, and was known as ‘King of the hippies’ to friends and locals.

Neil lived in the caravan for five years and found a sense of community by contributing to the town.

An annual Swiss-Italian festa began in the local area after a series of articles he wrote about the people who settled in Hepburn Springs during the gold rush. The festival is still running and is a popular attraction for tourists.

After writing an ad for a pen pal in an American newspaper, he began speaking to a school teacher in New York. After exchanging letters and phone calls, she offered to pay for Neil to come over to New York to visit her. He stayed with her for six months before returning to Australia.

A while later, Neil met another pen pal living in Italy who he visited for four months.

Neil eventually reconnected with his two daughters, who he now lives close by to in Portarlington. He is also regularly visited by his two young granddaughters.

You can read more about Neil’s fascinating life on his website here and you can order ‘Back to the Wall’ here.